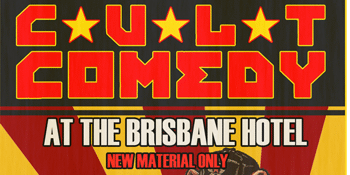 CULT Comedy returns with power and determination. The worlds burns but our island home in typical fashion is behind the times, we live in utopia where dick jokes can roam free. Our local loves of comedy have been in isolation, summoning comedy demons and learning new exciting ways of telling comedy jokes.

Please come along and witness what has been going through the minds of the cavalcade of comics new and old. For some it will be there first time ever doing comedy and for the veterens it's their first gig in like 8 months. CULT Comedy is all about new material sometimes it's the best and funny as and sometimes it's a bomb zone of the highest order and to be honest still pretty funny. It's new material baby! At The Brisbane Hotel

Tickets will be limited and all sold online, if you rock up on the night trying to get in you will be told to get the fuck on up out of here ( or just go drink in the other bar idk)